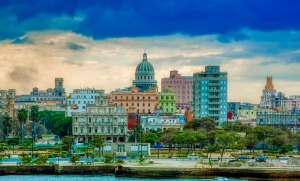 Speaking about the significant challenges Cuba faces on its way to liberalization and a higher standard of living, Dominguez drew attention to obstacles placed in the way of foreign direct investment. With the Mariel Harbor freeport in existence for five years, those few companies that have gained authorization to operate in the free zone are not able to directly contract with Cuban workers. Investing in a medium-sized Cuban opportunity requires hiring all Cuban employees through a Cuban state-owned enterprise. Only after the state-owned enterprise has pooled and selected candidates, is the company able to choose the workers it needs.

The end result is that international companies are not given a level of “freedom of choice” that meets their threshold requirements for risky investments abroad. Beyond this, there is the issue of “sheer paperwork,” with so much bureaucracy involved at every decision-making level that it is difficult to make even modest projects coalesce in a timely manner.